Hoppin' In The Hams 2023! Registration will open Monday August 29th. 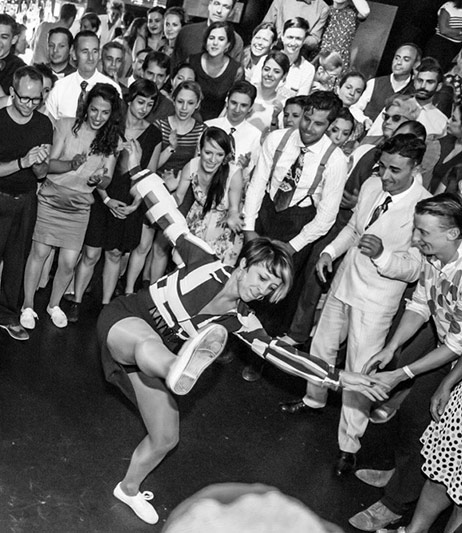 Jenny trained at The Doreen Bird College of Performing Arts.

As a young student, having several All England Championship titles in Tap, Ballet & Modern dance under her belt, she went on to win *The US Open *American Swing Dance & *UK Open Lindy Hop Championships.

Starting her West End Debut in Andrew Lloyd Webber’s Song and Dance with Wayne Sleep she continued to partner Wayne for the next 5 years in various shows, royal galas and guest appearances.

Recent accompishmets –  Musical Dance Consultant for the upcoming ‘Back To The Future’ The Musical.

Choreography and Assistant to Paul Robinson for upcoming music video ‘In These Shoes’ by Ex Bond Girl… Susie Vanner.

Since 2006 she has coached, choreographed and performed on many of the top Prime Time TV shows of today…

*Strictly Come Dancing *Strictly Christmas Special *The Peoples Strictly for Comic Relief *Strictly Dance Fever *So You Think You Can Dance *USA’s Dancing With The Stars *Jazz/Tap coach on ITV’s Dancing On Ice.

In 2019 Jenny had the honour of choreographing the D-Day 75th anniversary celebrations for BBC in Southsea for the veterans, 14 Heads of States and Her Majesty The Queen.

As well as choreographing 13 routines during this last season of Strictly Come Dancing, she was also interviewed on BBC2’s ‘It Takes Two’ for her choreographic contributions to the show for the past 13 years. Copy and paste this link to view the interview.  https://youtu.be/3t-q6Rv09FM

She has been choreographing Charleston, Salsa and Pro Group routines on BBC’s Strictly Come Dancing since 2006. Many of the memorable routines have been created by Jenny, such as Ed Balls ‘Gangnam Style’ Salsa, Danny & Oti’s ‘Puttin On The Ritz’ Charleston & ‘The Lonely Goatherd’ for Giovanni & Faye, to literally name but a few……

She was also choreographer for two prestigious TV Award nominations.

In past years she has been lead dancer for the filming of “How to” for Lindy Hop, Charleston, Boogie Woogie and Rock and Roll for BBC’s Strictly Dance Fever.

Jenny also made history by bringing Swing Dance to The Houses of Parliament with Strictly star Robin Windsor. Launching UK’s Dance Manifesto 2015 for the All Party Parliamentary Dance Group.

Between choreographic work, Jenny still continues to teach and inspire swing dancers across the globe with monthly online courses.